Om (ॐ) is an essential symbol in Hindu culture and Buddhism. This is one of the most sacred mantras in the Hindu Dharma which means “unity with the supreme”, that is, a combination of spiritual and physical. This symbol represents Braham, an impersonal deity.

In this culture, it is believed that this symbol is essential to fight against errors and  meditation brings you spiritual liberation. The curve of the upper part of the sign is the awakening, the conscious state in which the senses and intelligence work. The long curve of the lower part represents the asleep state. On the other hand, the curve that looks like an “S” represents the deep sleep and the dreams that we have in that state, activating in this way memories, impressions and desires. To finish we have the half moon (Turiya) and the point on top (Bindu). Turiya represents the sensory world and Bindu symbolizes the transcendental state.

All these elements have led religious scholars to the conclusion that there are three parts in the culture that gobeyond basic beliefs. In them you can recognize one part that creates, one that maintains the creation and one that destroys what no longer has sense to conserve.

It is also said that language was created from this symbol, constructing syllables and phonemes. It represents a sound that makes other sounds appear next to it. This sound, which represents a syllable, is used to reach a state of supreme meditation.

In addition to Eastern cultures, the meaning expanded to the West, taking its meaning as meditation and the calm of the spirit. The Om symbol supported every being to keep on with their lives, representing inner peace of each individual that adopts Om as a philosophy and way of living. 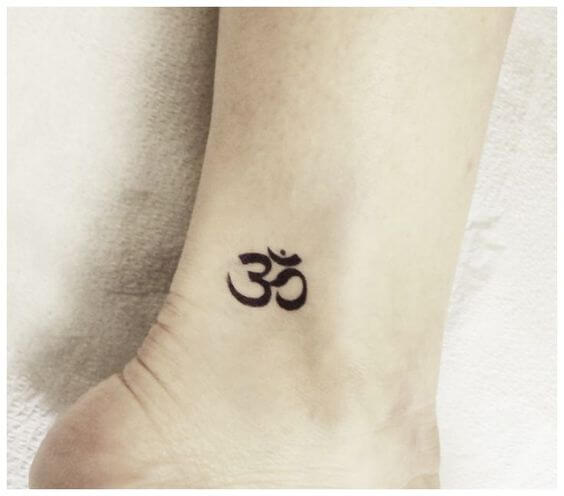 If you are thinking of getting a tattoo or have any question about our services of tattoos, piercings, henna tattoos, micropigmentation, microcapillary, tattoo removal or our tattoo courses, do not hesitate to contact us via email or phone, or visit us at our Tattoo shop in Barcelona.