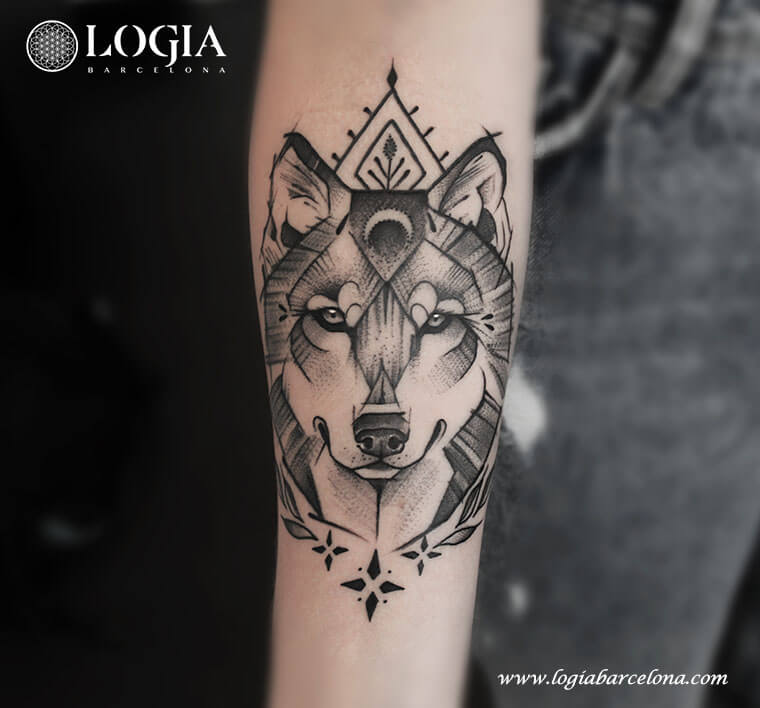 Feared and wild, the wolves are a mammalian species that has accompanied man for thousands of years. In addition to being considered the ancestors of domestic dogs are a recurring reason for tattooing. At the tattoo shop Logia Tattoo we tell you some curiosities about wolf tattoos and their meaning. And you can come by and pay us a visit to get a walk in tattoo as well!

Wolves are important animals for the ecosystem, although the population of wolves has been declining more and more because of man. On the one hand, wolves are carnivorous and tend to hunt in a herd, so they are considered social animals that follow a well-defined structure. Therefore, many people choose the wolf tattoo to symbolize both strength and ferocity as teamwork and family.

On the other hand, leading the pack we find the popular Alpha Male next to the Alpha Female. The couple is responsible for the group and as leaders are responsible for solving the conflicts that arise in the pack in order to keep it always united. The Alfa couple provides protection and security, being the example to follow.

Wolves are very intelligent and territorial animals. Their natural fierceness gives them a unique beauty. Wolf tattoos are also inspired by some of the values ​​associated with their behavior. As for example, the nobility, the cooperation between the herd, the cohesion of the group or the great capacity for adaptation. These may be some reasons to tattoo this splendid animal but for each person this tattoo has a personal meaning.

In Lodge we have done a lot of wolf tattoos throughout our history as a tattoo studio. That’s why we have a great collection of wolf tattoos of all styles to show you and inspire you for your next piece. Do you want to see them?

The tattoos of wolves, although traditionally is a reason that have been made more men, has gained much popularity in recent times among women thanks to designs that convey all that strength of the community, so important among them. One of our resident tattooists, Beve, knows it well: for that reason, she combines the mandala and ornamental style with the tattoos of wiser wolves. Very feminine and elegant designs.

Wolf tattoos on the arm

The ornamental style is not only suitable for women, but also men increasingly choose this style for their tattoos. The geometric tattoo is perfect to do in large and small areas, as shown by these wolf tattoos on the arm.

Realistic tattoos are those that capture reality as we know it on the skin. The tattooists who master this technique manage to capture all the character and personality of, in this case, the realistic tattoo wolf. Here are some realistic wolf pieces made by our tattoo artists such as Eduar Cardona, Javier Jas and many more.

The howling wolf tattoo is another of the most popular. It’s his war cry, his way of communicating with his pack. Here are a few ideas if you are thinking about getting this tattoo. In addition, this design can be done in any style of tattoo: double exposure tattoo, as a complement to Indian tattoos in realistic style…

The new school style, with its bright colors and clean lines, also has its application in the wolf tattoo. Here are some examples of the tattoo artist Felipe Videira.

The tattoos of wolves can be adapted to all kinds of styles, from the most realistic as we have seen until now to the craziest ideas. The style of abstract tattoo, sketch, sketch, watercolor … can capture in a very original the wolf tattoo. What do you think of these ideas?

We hope that this compilation of wolf tattoo works by our resident tattoo artists and guest artists will have inspired you for your next piece. If you like what you see and want to get a wolf tattoo, contact Logia and we will be happy to assist you and make an appointment at our studios in Barcelona and Hospitalet. Hit it!

Any cookies that may not be particularly necessary for the website to function and is used specifically to collect user personal data via analytics, ads, other embedded contents are termed as non-necessary cookies. It is mandatory to procure user consent prior to running these cookies on your website.